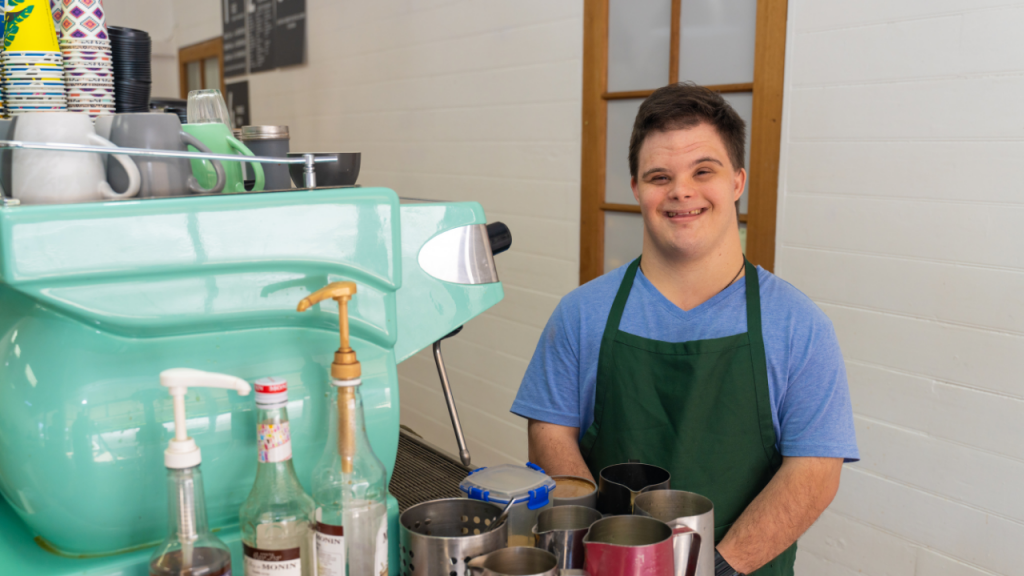 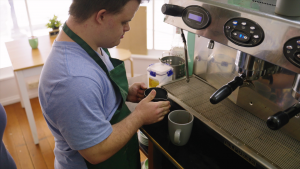 Working at the Café and spending time with his customers and co-workers definitely lights up Jack’s day.

Following the rich aroma of the roasting coffee beans, there’s this beautiful genuine smile behind the coffee machine. That is Jack, making a coffee for his customer on a lovely sunny morning.

From his lovely heartfelt smile, most people would find it hard to imagine that Jack was once shy and lacked self-confidence for a very long time. But now, thanks to his loving personality, can-do attitude and a special knack for cake decorating, he’s grown into a local star and is famous in the Cairns area for his “Jack Special” cake.

So, how did Jack overcome his lack of confidence?

Jack is a very warm young man who is super affectionate, caring, and thoughtful. He lives with his family in the beautiful tropical city of Cairns up in Far North Queensland. Being born with Down Syndrome, Jack faced many challenges growing up. He had been always worried about not being able to express himself clearly and believed that people did not want to talk to him. Over time, Jack experienced difficulties communicating with people, especially strangers.

As Jack was about to finish school, he began to consider employment. He knew he needed to do something for himself but did not know where to start. So, when he heard about the School Leaver Employment Supports (SLES) program, Jack reached out to breakthru.

When our support worker Quinn first met Jack almost three years ago, he displayed as a shy reserved young man who lacked self-confidence and with very little self-belief. But Jack was determined to take a step forward. He spent a considerable amount of time working on his mindset, speech, and communication skills. A few weeks later, Jack slowly started to come out of his shell and felt more comfortable being around with his colleagues and other people in the community. He began to take part in conversations and started to feel more confident in expressing his opinion.

Having seen such significant progress, Jack and his support network moved on to the next phase to gain more real-world experience. They started going to a local coffee shop where Jack had problems ordering what he wanted. After some gentle encouragement and reassurance, he soon built his confidence and was able to place orders on his own. He even went one step further to start a conversation with the coffee shop staff which many of his friends and family thought was amazing to witness. 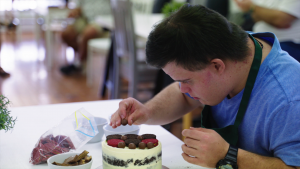 Jack discovered his secret talent and passion for cake decoration.

As Jack’s overall confidence level increased, he was more and more involved with other people and took part in various activities without being prompted.

Having seen this steady increase in his confidence, Quinn knew Jack was now ready to start a new life chapter. So, he spoke to Jack and his family about job trial in a café, which Jack was quite interested in. After initial discussions with local Cafe owner Chai, Jack was then offered the opportunity to work on a casual basis at Archie & The Bear Cafe with assistance from his Support Worker Quinn.

Working is definitely a brand-new experience for Jack. It was a bit overwhelming to begin with, but soon Jack started to embrace and enjoy this whole new journey. Not only could he complete tasks and work as a team member at the café, but he also became very popular among customers due to his lovely personality. He even discovered his secret talent for cake decoration and became a local star for his unique “Jack Special” cake. He was featured on both WIN News Cairns and 7 News.

Coming out of his shell 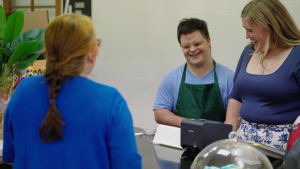 Working at the Café and spending time with his customers and co-workers definitely lights up Jack’s day.

Jack’s sister Rhylee was so blissful to see how happy Jack has become. “The biggest change in Jack since he’s started working is his confidence. It’s just awesome. I’ll come home and he’ll just tell me ‘I had work today!’  And he’ll just be so happy, he’ll tell me everything he did, how many cakes he made, who he served, and it just lights up his day”, she said.

Breakthru team member Quinn has been working with Jack since he started working at Archie & The Bear Café and she’s witnessed how much he’s grown. “The biggest improvement I’ve seen in Jack has been his confidence. He has gone from someone who was quite shy and worried about his speech and being understood to someone that’s happy to speak to anyone. Because I think he’s finally figured out that we care about what he’s going to say. We will take the time to listen to him because what he has to say is interesting and important.”

Quinn proudly commented that “Jack has grown rapidly, from a shy, reserved young man, to someone who wants to leave his mark on the planet. He is confident in expressing his opinion, he is always willing to learn new skills, and strives to be a team member with others. Working with Jack and watching him grow in so many ways has been simply amazing, to the point we are now very good friends.

Jack is ecstatic at his own progress as well and is thrilled to see all of his hard work paying off.  “I enjoy making the coffee and the cakes. I feel happy. It goes right to my heart. Because all my friends are like a big, big family”, Jack said.

Breakthru has over 25 years of experience helping thousands of Australians just like Jack find and maintain meaningful employment. Get in touch with one of our friendly staff today to find out what we could do for you. 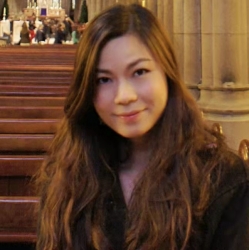 Olivia Dawson
Marketing Coordinator at breakthru
After working nine years in the watch industry in the sales and marketing field, Olivia decided to pursue her passion for marketing and completed a Bachelor of Business (Marketing) degree. While she was helping her former employer build the marketing department and create various brand assets from scratch, she discovered a great interest in Digital Marketing. And now, she has over four years of experience in Digital Marketing across B2B and B2C businesses.

Touched by an inspiring story of a client with a disability, Olivia wishes to do more with her marketing skills and help more people in need. She joined breakthru in July 2021 and has enjoyed her role ever since.